Blair
I'm a History and Arabic double major at Georgetown University. I'm writing this blog during my fall semester abroad in Cairo, Egypt. I'll be a junior this fall.

The morning after Petra, we hopped on a bus headed towards our next stop- Wadi Rum. Wadi Rum is about an hour and a half south of Wadi Musa in southwest Jordan. Wadi means valley and rum is usually considered to mean "high" in this context. Wadi Rum is the largest wadi in Jordan covering about 720 sq. kilometers, and as a result, it receives a fair amount of tourists each year. However, because of its huge size, you don't feel like you need to content with other tourists. Towering mountains of sandstone and granite dominate this desert area and have made it a popular rock climbing, hiking, and trekking area. Today, Bedouins live in the surrounding area and offer tours via camel, jeeps, or hiking.

We arrived in the small town right outside of the actual Wadi Rum park about 9 or so in the morning. We were really hungry and most of us ended up eating what was supposed to be our lunch: a cucumber, tomato, plain yogurt, a candy bar, a cookie, and some bread. The owner of the trucks that were going to take us around Wadi Rum, Zidane, gave us a run-down of the day that lay ahead. After taking only the essential things we would need for the coming day and night, we hopped in a 4 x 4 and headed out. 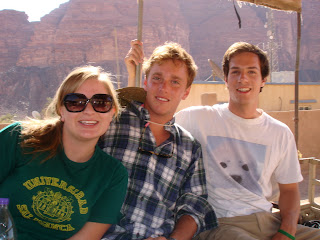 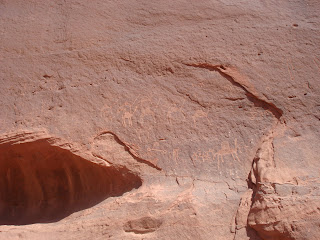 You can't quite see them clearly, but the above picture shows some ancient rock drawings. Though crude and rudimentary, they depict stick figure humans and some animals.

The ride was pretty rocky, and at times, it seemed like our truck might flip. Still, the views were stunningly beautiful and some of the historic sites were very interesting. While Wadi Rum has been inhabited by different peoples since prehistoric times, it is most known for one former resident in particular: the famous British officer, author, and orientalist, T.E. Lawrence. During the Arab Revolt in the early 20th century, Lawrence took residence in Wadi Rum. 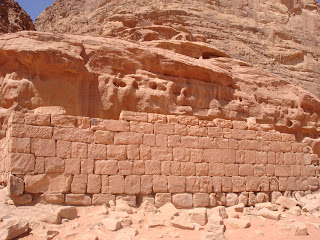 This is supposed to be the house where T.E. Lawrence lived while staying in Wadi Rum leading the locals in their fight against the Turks and Germans. We saw some other things that were also linked back to Lawrence as well; including, some fountain where he drank and a mountain called the "Seven Pillars of Wisdom" referring to Lawrence's book of the same name (people think the rock was named after the book in honor of Lawrence). I think the emphasis on Lawrence is more of a business scheme than anything. Most people in the world have never heard of Wadi Rum, but many know of T.E. Lawrence or at least, the movie Lawrence of Arabia. Anyways, Dad, I know you would have really liked those things. 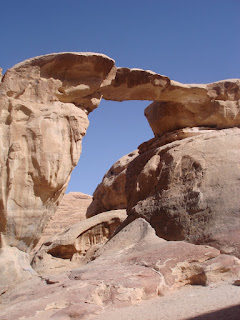 The Rock Bridge
The above picture of the Rock Bridge is one of the famous sites at Wadi Rum because it forms a natural bridge. To climb up it, we had to scale the face of the rock to the right of it, which was an exercise in conquering your fear. The nearly vertical climb up was not for the faint of heart, and I would be lying if I said it was easy. Once atop, I quickly walked across the bridge and descended (which was even more difficult) to the safety of the ground below. On the way down, as I'm slowly making my way, some Bedouin tour guide is calmly and confidently walking down the rock face as if it's nothing. It was a pretty funny sight: I'm doing a crab walk next to someone walking normally.
Another one of the fun things we did is climb up some sand dunes. These dunes were really high and trying to hike up them was quite the challenge! But going down them was so much fun. You could jump once and drop 10 feet on nice soft sand, and do this 10 times on your way back down. I wish I would have put a picture of the dunes up, but hopefully I'll see some in Egypt. But the red sand contrasted with the bright, clear blue sky for an incredible view. After a long day in the back of a 4x4 and climbing around huge mountains and sand dunes, we finally reached where we would be spending the night- a mock Bedouin tent complex.
Before we had dinner, we all took naps and then went to a mountain in the distance to catch the sunset. While we were there, we would all be silent and for the first time since I can remember, I experienced absolute silence. That was really neat. It definitely gave some backing to the old saying "the silence is deafening." 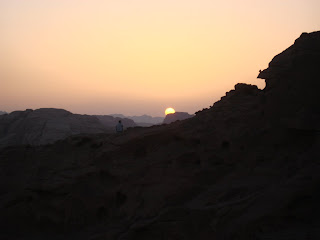 Sunset
After catching the sunset, we ate a traditional Bedouin dinner in one of the tents. The food was absolutely delicious, and it was fun to talk with Zidane about the Bedouins (He's Bedouin). He played some Bedouin instrument, a sort of archaic cello that was really, really small, but played with a bow. After stuffing ourselves full, we went outside and sat around a fire while one of Zidane's assistants played the Oud, the Arab version of a guitar. Because there was no light pollution in the area, the sky above was filled with stars. We decided to take our mattresses from our tent and sleep outside. That was my favorite part of the entire trip- sleeping under the stars. I will never forget such an amazingly beautiful sight as that. Never before had I seen so many brilliant stars in the sky. I wish I could have snapped a picture, but it made such an impression on me that I will always remember the starry night at Wadi Rum.
The next morning, we woke up early enough to catch the sunrise from another mountain top. After that, we ate some breakfast, then headed back to town, and from there, all the way back to Cairo.
I had a fantastic trip and would recommend anyone to go to Jordan if they can. I wish I could have stayed longer, to be honest, I was excited to get back to Cairo as well. Hope you enjoyed the descriptions of the places I went, and someday, in shah Allah, you will go there and see them for yourself.
Upcoming posts: Pyramids at Maidum and Dahshur, Egyptians on the American Presidential Election, and Rugby at AUC.
Ma'a salaama,
Blair
Posted by Blair at 11:04 AM

Is the world ready for Blair to play rugby?

Hey dude- ahlan wasahlan- kayfahal-
It's Loren from NSChurch!
Just skimmed your blog.
Your mom sent me the link.
It's fantastic!!!!!!

Have a wonderful day:)
LB